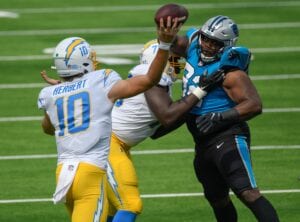 Kerr, 30, wound up signing on with the Colts as an undrafted free agent out of Delaware back in 2014. He managed to make the 53-man roster in all three of his seasons with the Colts.

Kerr later signed on with the Cardinals and finished out the year in Arizona. He signed a one-year deal with the Panthers last year but was released this offseason.

In 2020, Kerr appeared in 13 games for the Panthers and recorded 32 tackles, two sacks, a forced fumble and two passes defended.