Ross becomes the fourth player to sign a futures deal with the 49ers since their season ended. The full list includes:

Ross, 26, originally signed on with the Titans as an undrafted free agent out of Arizona State back in 2013. He had brief stints with the Chiefs, Redskins and Bears before returning to Washington during the 2014 season.

Ross has managed to make the 53-man roster in each of the past two years with the Redskins. However, he was cut loose by Washington back in December and later added to the Lions’ practice squad.

In 2016, Ross has appeared in five games and caught one pass for eight yards receiving and no touchdowns. He has also contributed 22 kick return yards for Washington this season.

Weston Richburg Underwent Hip Surgery, Unlikely To Be Back With 49ers 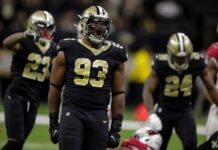