Jay Glazer of FOX Sports reports that the 49ers have agreed to terms with veteran CB Josh Norman on Sunday. 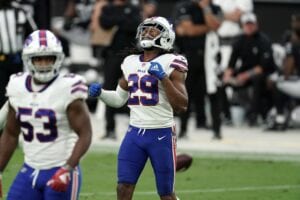 Mike Garafolo confirms the news and adds that Norman can earn up to $2.5 million as part of this deal with San Francisco. According to Garafolo, Norman had interest from other teams, but he was able to secure a deal with a base value above the minimum from the 49ers.

Norman, 33, is a former fifth-round pick of the Panthers back in 2012. He spent four years in Carolina and actually received the Panthers’ franchise tag following the 2015 season

However, Carolina surprisingly pulled the tender and he eventually signed a five-year, $75 million contract that includes $36.5 million fully guaranteed with Washington.

Norman was set to make a base salary of $12 million for the 2020 season when Washington released him last year. He later signed a one-year deal with a base value of $6 million with the Bills.

In 2020, Norman appeared in nine games for the Bills and recorded 24 tackles, one interception, a defensive touchdown, a forced fumble, two recoveries, and four pass deflections.