Bills GM Brandon Beane tells the Buffalo News that he was working to trade up to No. 4 overall with the Browns, but they ultimately decided to pass on their offer to move back.

“I probably talked to John Dorsey more than anybody through the process, but we could not come to an agreement on what was fair,” Beane said.

Beane added that he was prepared to trade the Broncos their No. 12, No. 22 and second-round pick to move up to No. 5, but the deal was contingent upon Bradley Chubb being gone.

“John calls me and says, ‘All right, here’s what we’ll do,’” Beane said. “We finalized the deal, but it’s contingent on his guy not being there. . . . I was a little bummed when Elway told me, ‘Hey, this is our guy.’ I felt like what I had to offer John was better than anybody else could offer. I felt like I was bidding against myself, basically.” 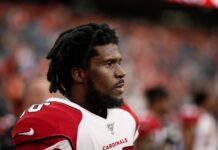 186,627FansLike
7,623FollowersFollow
276,248FollowersFollow
© NFLTradeRumors.co is an independent news source and has no affiliation with the National Football League (NFL), NFL.com, or any team(s).
wpDiscuz