Jets first-round OT Mekhi Becton steps into the NFL and instantly becomes one of its largest players at 6-7 and 364 pounds. While his performance at the NFL Combine proved he’s far from a player who just takes up space, Becton’s weight and ability to manage it was still a question for NFL scouts. However, his strength coach at Louisville, Mike Sirignano, said he never had an issue since Becton’s weight ballooned to 389 after Louisville fired Bobby Petrino. Sirignano administered punishments for players who didn’t send in their meals or complete their allotted workouts. He never had to punish Becton.

“We haven’t had an issue with it [since],” Sirignano said via NJ.com’s Darryl Slater. “He doesn’t fluctuate like people would think with someone that size. I don’t ever see that being a problem.” 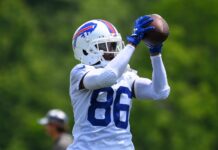