The Athletic’s Tim Graham previously reported that the Pegula’s were facing a deficit from their oil and gas company, given that natural gas prices fell to $2.14 per unit when capping their wells in July.

Additionally, Pegula’s 57 percent purchase of Rand Capital Corp at $3 per share in 2019 has now fallen to $2.12 per share as of April.

“There is no financial situation,” Pegula said, via Matt Parrino of Syracuse.com. “I don’t know where that rumor started. If you look at every oil and gas company, which is our core business outside sports, they’re all — you might use the word — hurting. But we don’t have any debt on our oil and gas business.”

As for the impact of the virus on sports, Pegula said they are still working to understand how financials will be affected with a key focus on their NHL franchise, the Buffalo Sabres.

“We need to do better moving forward in the sports business like every team’s gonna have to do,” Pegula said. “If we don’t have any fans in the seats next year what are the economics in the world of sports? We need that component, especially in the National Hockey League. Even though times aren’t good in any of these businesses, it’s still, you gotta find solutions. You have to look up and try to find those solutions.”

However, Pegula said there is currently “no financial pressure” on the Buffalo Bills.

“Talking about the Bills, there’s no financial pressure, negative, on the franchise,” Terry Pegula said. 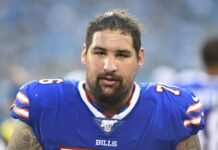 186,384FansLike
7,623FollowersFollow
276,232FollowersFollow
© NFLTradeRumors.co is an independent news source and has no affiliation with the National Football League (NFL), NFL.com, or any team(s).
wpDiscuz