Former Broncos QB Peyton Manning said he still follows the Broncos as a fan, but isn’t sure he wants to be part of the front office.

“Living in Denver, I’m a Broncos ambassador, fan, season-ticket holder. Been to every game the past 5 yrs … So I’m interested in what’s going to happen as anybody because I care about it,” Manning said, via Mike Klis. “Just like I care about the Colts, University of Tennessee. I’ve gone on a year-to-year basis in this 2nd chapter. I’m going to try to do this, this year. I don’t go past that because you try different things and maybe you like it, maybe you don’t. Look, being part of the game is important to me. I’ve found different ways to be involved with it. To watch film with Joe Namath and Raymond Berry, I mean that’s a dream come true for a football junkie like me. But I’ll always be a part of the Colts and Bronco organizations in some way. But I’m interested in what’s going to happen. I haven’t said no to anything officially forever. I’ve just said no to some things each yr. The next yr maybe things change. So who knows what will happen in that.”

“I think it’s just a new energy that was much needed,” Crosby said, via Heidi Fang of the Las Vegas Review-Journal. “I feel like Quinton has a lot to prove, Solomon has a lot to prove. There’s a lot of guys that are humble but also at the same time know what they can do and really want to go out there and show people their best football.”

Crosby believes Ngakoue and himself have yet to play at their full potential.

“I know I’m one of those people. I think I haven’t even touched where I can really be in this league. And Yannick as well, he knows he can be even better. Everybody just has something to prove and I feel like that’s going to be a scary combination once we all get out there together.” 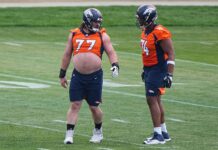