Browns DL Jadeveon Clowney called playing the interior line is “a lot different” but feels capable of playing inside or edge rusher roles.

“It’s a lot different,” Clowney said, via Anthony Poisal of the team’s official site. “Everything happens quicker down there. You have to get into your rush a lot quicker with everything happening, but you’re closer to the quarterback so it’s a win/lose. Everything happens fast, but you’re going against a lot of non-athletic guys inside so the matchups are there, and you just take advantage of your matchups. I feel like I can play inside or outside. I don’t mind.”

Browns DC Joe Woods said their defensive line is capable of moving around Clowney and DE Myles Garrett in order to create “some favorable matchups.”

“(Opponents) are going to make a choice of who they’re going to chip and where they’re going to slide the protection to,” Woods said. “It will be a great complement, and we will also be able to move those guys around just to try to create some favorable matchups for ourselves.”

Jets DC Jeff Ulbrich said rookie LB Jamien Sherwood has picked up the linebacker position quickly as he learns it.

“I’ve been around a lot of rookies as a player and a coach, and he’s unique in the way that he has absolutely picked up the fine details of this defense already,” Ulbrich said, via Jets Wire. “His ability to command the defense, run the huddle, make the adjustments, make the checks, the calls, the whole thing. Very exciting.”

Sherwood himself said he is comfortable learning the new position.

“That transition from safety to linebacker, it hasn’t really been much of an issue… When I do step out on the field, it’s just like secondhand nature,” Sherwood said, via SNY.

“I’m happy with the talent,” Harbaugh said, via Todd Karpovich of SI.com. “I feel like it’s a talented group, and I’m very excited about what we’re capable of achieving.”

Ravens CB Marlon Humphrey believes that having more receivers is beneficial for offenses given it makes things more difficult for defensive backs.

“You want to have it to where you’ve got five and six and seven wide receivers, to where it makes it really tough on what wide receivers you pick,” Humphrey said. “It seems like in the past, it was like these three guys, these four guys are for sure going to make it, and then we don’t know about this guy.”

Ravens’ second-year WR Devin Duvernay said he is hoping to “take advantage” of his opportunities this season and wants to earn the trust of the coaching staff. 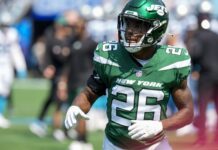