There is a lot of speculation about whether Colts’ WR T.Y. Hilton will be returning to Indianapolis next season. Whatever the case, GM Chris Ballard and owner Jim Irsay have continued to heap praise on Hilton all season long.

“He’s always been a great player, but how he has grown, as a teammate, man, he’s really special dude,” Ballard said, via Kevin Bowen of 107.5 The Fan. “T.Y. Hilton is a really special dude. Before we played Buffalo, I walked up and I said, ‘I love you. I do.’ T.Y. is not the most emotional guy but he gave me a hug. He knows…he’s special man, as a person, and as a teammate, and as a competitor. As to his ability, T.Y. can still play. Whether it’s at the level it was 4 or 5 years ago, as you get older, you have to find different ways. But I’ll tell you this, T.Y. is smart, instinctive, knows how to get open and he still has value. We’ll see how it works out here over the long haul. But we value T.Y. and we think he can still play. And he’s been a great Colt.”

Ballard added that he still thinks Hilton can play a “significant” role as the wideout approaches his 32nd birthday. He also says that his return will depend heavily on the market and the salary cap situation this offseason.

“What’s been really cool about T.Y. is to see his growth and maturity,” Ballard said. “That’s been really cool (as a person and player). When you are used to catching 1,400 (yards) to all of a sudden to go to 600-800, that’s a little bit of a hit to the ego. He never once bitched, complained. No, here’s my role. This is what I’m going to do. How do I help the team win? A lot will depend on the market because we have some work to do. But would we like him back? Yes. We’ll see if it works out.”

Irsay also added his two cents about seeing Hilton back in blue and white in 2021.

“We’d love to see T.Y. (Hilton) back, there is no question about it,” Irsay said. “He is such a great Colt. What a competitor and still has excellent skills and can take over a game. I think that the biggest thing at this point in a career for athletes and you see it all the time is a competitive nature, look there is a business side to it. You want a guy back but it has to fit into what you view, what the marketplace dictates, and other teams, and where someone’s value falls with the price sign. It really comes down to that. The biggest thing that I’ve found is, you want guys that really want to be here so sometimes if they don’t hit their price mark, you don’t want them to be resentful saying, ‘I should have gotten more.’ So, you’re always wanting to make sure…It’s just a question of trying to find what that means financially. I know Chris and him will talk with his agent. We would love to have T.Y. back. T.Y. is such a major Colt. Really, you think about the great receivers in this franchise’s history and T.Y. has done some of the most remarkable things that all the greats that you guys know about have done. You love to see someone like T.Y. be back because he is such a good man, he’s such an outstanding football player and a selfless player that you are just hoping that it works out that way. But the market usually dictates that. That’s the aspect of free agency. When all is said and done, I’m really hoping that it works out that we can work something out and Chris can work it out with T.Y. and his agent and we find a way there because we are a better football team with T.Y. and we love him as a legacy player and as a present player in how he can help us get to where we want to go. He is a great veteran leader and still has plenty of gas in the tank.” 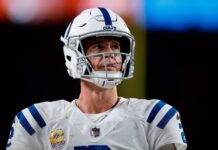 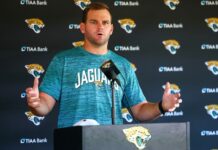 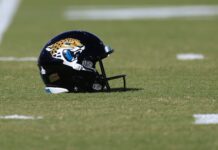 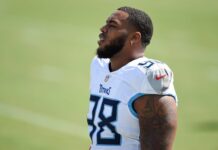