Colts LB Zaire Franklin answered questions about new QB Carson Wentz and his time with the Eagles, as well as his connection with HC Frank Reich.

“He’s locked in. He’s really excited,” Franklin told Marcus Hayes of the Philadelphia Inquirer. “I’m ready to get to [training] camp to see how he is, competitively. I ain’t gonna lie; he’s excited about the fresh start. He wishes things had gone better in Philly, but he’s super happy to have a fresh start. Especially him being back with Frank. He and Frank, obviously, already have that connection.”

Texans LBs coach Mike Smith expects LB Zach Cunningham to have a “huge impact” on their defense in 2021.

“Zach is a special football player,” Smith said, via TexansWire.com. “He’s able to do a lot of things that quite frankly a lot of linebackers can’t do. So, I think he’s going to have a huge impact on what we do going forward.”

“As a whole, I think he’s shown that he’s as talented as any other linebacker in the NFL,” Smith added. “So, for us going forward, it’s nice for us to have a piece in place that you can demand on with him.” 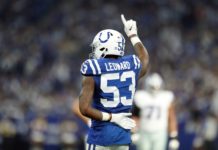