New Broncos G Graham Glasgow said the chance to work with noted Broncos OL coach Mike Munchak was a big draw for him signing with Denver.

“I’ve heard from multiple and countless sources that he’s an awesome coach,” Glasgow said via Ryan O’Halloran of the Denver Post. “I’m looking forward to [working with] somebody who can help me become the best player I can be.”

After leaving the Broncos where he had played his entire career, CB Chris Harris was trying to decide between offers from the Saints and Eagles when the Chargers swooped in. Not only were they proposing a two-year deal and the chance to play with other elite defensive backs, Harris said he was sold on their pitch about winning in 2020.

“They want to win and they’re saying the time is now, and they’re acting urgent,” Harris told NFL Media’s Ian Rapoport. “And that’s what I want. I want an organization who wants to win and who’s showing it, and that’s what they’re doing. They just want me to come in here and be a leader, come out here and make plays and be able to just elevate this defense, and really just add more versatility.”

Harris added he was ultimately satisfied reconciling that statement and the reports that the Chargers intend to go into next season with Tyrod Taylor as their starting quarterback despite a plethora of other arguably more established options. He acknowledged the apparent dissonance but also expressed his confidence in Taylor.

“You definitely think about it, but I just think Tyrod, I got confidence in him, even though a lot or people don’t. I don’t think he’s ever gotten a real chance to be a starting quarterback with this many weapons,” Harris said. “When he was with Buffalo, they didn’t have the weapons around him like they do here. I think he can definitely make some plays. He’s mobile, he’s smart. I don’t see why he can’t do the job. But if they want to bring in somebody else, I understand. Competition makes everybody better.”

Marcus Mariota clearly wants to be a starter again. It’s no coincidence that he signed a $17 million deal, higher than usual for a backup quarterback, to join the Raiders where the incumbent starting QB Derek Carr is widely seen as vulnerable. Even if Mariota is gunning for a starting job, though, he understands the first way to do that is to support Carr as his backup and know his place.

“First and foremost, this is Derek’s team, and I understand that,” Mariota told KHON-TV Hawaii. “I understand that going in. For me my priorities going into free agency was to be a part of a team that I felt could bring out the best in me and whatever happens, whatever comes to that, I’m ready for, but I do know that to play starting quarterback in the NFL, to be at that spot is not any easy job to do, and I think when it comes down to it, a strong, stable, supportive quarterback room makes that job a whole lot easier. That’s what we have to do. I’m going to do my best to support Derek in every possible way that I can and along with that I’m just going to try to become the best player that I can be and see where that takes me.”

Mariota added that the stability of the Raiders’ front office, with Raiders HC Jon Gruden working on a 10-year contract and GM Mike Mayock just entering his second year, was a major factor. Gruden’s ability with quarterbacks also attracted him to Las Vegas.

“I had two priorities that I had while I was going through this free agency process,” Mariota said. “Number one was to find stability. I wanted to be a part of an organization that had a stable head coach, that had stability in the front office, and secondly for me, I wanted to be a part of a coaching staff that could bring out the best in me. That could embrace my talents and kind of put my best foot forward.” 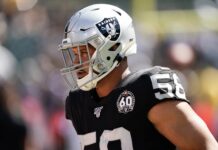 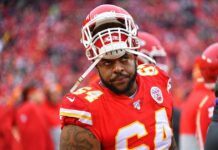