According to Fox 13’s Kevin O’Donnell, an arrest warrant has been issued for former NFL WR Antonio Brown in Hillsborough County, Florida, for multiple domestic issues stemming from an incident on Monday, November 28, with the mother of his children. 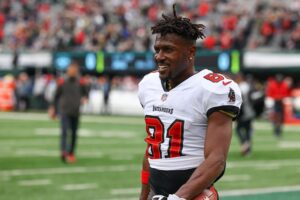 Tampa police filed a risk protection order against Brown on Tuesday, which sought to remove guns he had access to in order to protect Brown and others. It was denied, however.

Per the police report, Brown and the woman appeared to have a conflict that resulted in the receiver kicking her out of the residence:

“The suspect exited the residence and threw a shoe at the victim striking her in the ponytail,” the police report stated. “The victim had no injuries but believed the shoe was meant for her head. The suspect would not open the door or come outside to speak with officers. The suspect also during this incident attempted to issue an informal eviction to the victim.”

“…The suspect placed an informal eviction notice on the door, which will be uploaded to this report, with 11/28/2022 at the date showing the victim has 7 days to gather her belongings and leave. The suspect continued throughout the incident to state that the victim had no right to be at that residence or to even gain entry to it because she did not live there. The victim’s ID has the listed address as her residence as of 10/18/2022.”

Brown hasn’t played since his infamous blowup in 2021 while with the Buccaneers and has said his career appears to be over.

Brown, 34, is a former sixth-round pick of the Steelers back in 2010. He was in the third year of his five-year, $72.71 million contract when the Steelers traded him to the Raiders in March of 2019.

The Raiders later signed Brown to a new contract worth $50.125 million and including $30.125 million guaranteed. However, Oakland made the decision to release Brown before the start of the season and he later signed a one-year deal worth up to $15 million with the Patriots.