According to Jeremy Fowler, the Bears are among the teams showing interest in Bills’ free-agent WR Isaiah McKenzie. 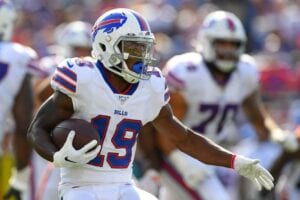 McKenzie, 25, is a former fifth-round pick of the Broncos back in 2017. He was in the second year of his rookie contract when the Broncos waived him coming out of the preseason and re-signed to their practice squad.

McKenzie was on and off of the Broncos’ active roster before eventually being claimed by the Bills in 2018. Buffalo re-signed him to a one-year contract last offseason and is now testing the open market as an unrestricted free agent.

In 2020, he appeared in all 16 games and recorded 30 receptions for 282 yards (9.4 YPC) and five touchdowns, to go along with 32 yards in kickoff returns and 84 punt return yards and one touchdown.