Josina Anderson reports that the Bears are signing OL Germain Ifedi to a one-year contract. 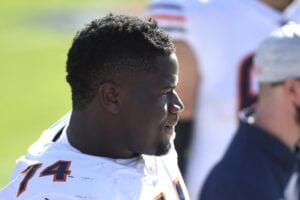 According to Ian Rapoport, Idefi receives a one-year contract worth up to $5 million.

Adam Schefter adds that Ifedi’s contract is worth a base value of $4.25 million.

Ifedi was testing the market as an unrestricted free agent when he agreed to a one-year deal with the Bears last year.