The Buffalo Bills have already announced their extension for LT Dion Dawkins.

Dion Dawkins has signed a four-year contract extension with the @buffalobills through 2024. pic.twitter.com/rnSn8UvI0k

Adam Schefter of ESPN is reporting that the Bills are signing LT Dion Dawkins to a four-year, $60 million contract extension on Thursday. 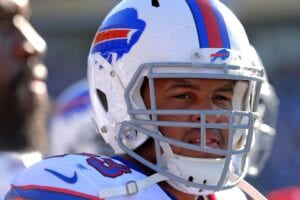 This new deal will keep Dawkins in Buffalo through the 2024 season.

Back in April, Bills GM Brandon Beane mentioned that they were discussing an extension for Dawkins, so it’s not a big surprise that they moved to get a deal done before the start of the regular season.

Dawkins, 25, is a former second-round pick of the Bills back in 2017. He was in the final year of his four-year, $4.18 million contract that included $1.93 million guaranteed.

In 2019, Dawkins appeared in all 16 games for the Bills, making 16 starts at left tackle. Pro Football Focus has him rated as the No. 25 offensive tackle out of 80 qualifying players.