Field Yates of ESPN reports that the Bills are hosting free agent LB Tyrell Adams for a visit. 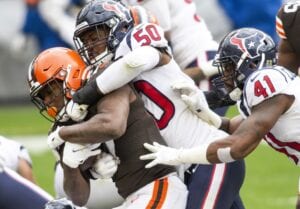 Adams, 28, originally signed on with the Seahawks as an undrafted free agent out of West Georgia back in May of 2015. He had brief stints with the Chiefs, Raiders, Bills, Colts and Texans before signing on with the 49ers in 2018.

The Texans later signed Adams and he has been on and off of their active roster the past few years.

In 2020, Adams appeared in all 16 games for the Texans and recorded 123 tackles, two sacks, two forced fumbles and four passes defended.