Ryan Talbot of NewYorkUpstate.com reports that the Bills are hosting veteran TE Lee Smith for a visit.

This is the first reported interest in Smith since he became available last week.

Smith, 31, is a former fifth-round pick of the Patriots back in 2011. After four years with the Bills, Smith signed a three-year, $9 million contract with the Raiders back in March of 2015.

Smith was set to make a base $3 million base salary for the 2017 season when he agreed to a pay cut in 2017. He returned to the Raiders last year and actually received a bonus from Oakland after the season.

In 2018, Smith appeared in all 16 games for the Raiders and caught 10 passes for 73 yards receiving and three touchdowns. 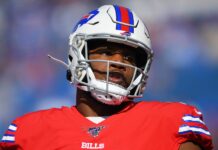