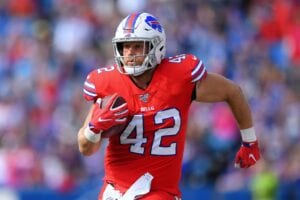 DiMarco, 30, originally signed on with the Chargers as an undrafted free agent out of South Carolina back in 2011. He later caught on with the Chiefs before joining the Falcons in May of 2013.

After finishing a two-year contract with Atlanta in 2016, DiMarco signed a four-year, $8.4 million deal with the Bills in March of 2017. He’s entering the final year of his contract and set to earn a base salary of $1,800,000 next season.

DiMarco agreed to a restructured contract back in March.

186,519FansLike
7,623FollowersFollow
275,979FollowersFollow
© NFLTradeRumors.co is an independent news source and has no affiliation with the National Football League (NFL), NFL.com, or any team(s).
wpDiscuz