ESPN Boston’s Mike Reiss and Mike Rodak seem to agree that the Patriots are likely to cut WR Brandon Tate.

It was just last season that many believed that he was a breakout candidate that could give New England the deep threat that they lost when they traded Randy Moss away early on in the season. Tate is another player that has seen is value impacted by the leagues decision to change the kickoff from the thirty yard-line to the thirty-five yard-line. 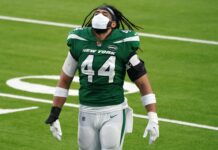