Adam Schefter reports that the Eagles are trading TE Zach Ertz to the Arizona Cardinals in exchange for CB Tay Gowan and a 2022 fifth-round pick. 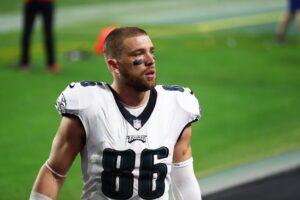 According to Schefter, Ertz has wanted a new contract but has yet to discuss a potential deal with the Cardinals.

Schefter says that the Cardinals are acquiring Ertz with the idea of making him a regular featured part of its offense.

Ertz has reportedly told people in the past that Arizona was an appealing option to him.

The Eagles have already confirmed the news:

Trade: The Eagles have acquired CB Tay Gowan and a 2022 fifth-round pick from Arizona in exchange for TE Zach Ertz. pic.twitter.com/bKIhzqbdKg

Last night, Jay Glazer of FOX Sports reported that “several” teams have been calling the Eagles about potential trades for their tight ends Ertz and Dallas Goedert.

Ertz had been on the trade block for most of the year, but the Eagles reportedly did not like the offers they received for him and opted to hold on to him until now.

In 2021, Ertz has appeared in six games for the Eagles and caught 18 passes for 189 yards receiving and two touchdowns.