According to Ian Rapoport, the Panthers have finally worked out a trade for Browns QB Baker Mayfield. 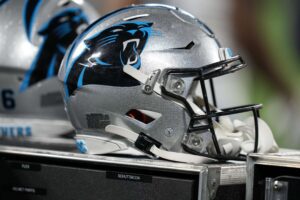 The two sides have been in discussions for a potential deal for months and appear to have finally pushed it over the goal line.

Rapoport says a conditional 2024 fifth-round pick will go to Cleveland from Carolina. Mike Garafolo adds it can become a fourth-round pick based on playing time.

He also adds that the Browns will pay $10.5 million of Mayfield’s scheduled $18.898 million 2022 salary. The Panthers will pay about $5 million and Mayfield agreed to take a $3.5 million pay cut to push the deal over the line. However, he can earn that money back in the form of incentives.

The deal is pending a physical on Thursday before becoming officially official.

The former No. 1 pick in 2018, Mayfield will now be the odds-on favorite to be Carolina’s presumptive Week 1 starter when they face off against the Browns.