According to Aaron Wilson, the Broncos are cutting RB Nate McCrary on Thursday. 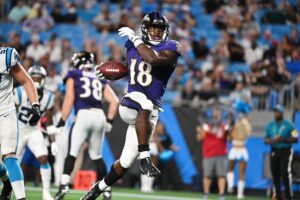 McCrary, 22, originally signed on with the Ravens as an undrafted free agent out of Saginaw Valley back in May but was waived in the preseason and claimed by the Broncos earlier this month.

During his college career, McCrary appeared in 33 games and recorded 377 rushing attempts for 1,889 yards and 28 touchdowns.