Mike Klis reports that the Broncos are elevating RB Damarea Crockett and CB Nate Hairston to the active roster for Week 1 and that he will be the No. 3 running back on game day. 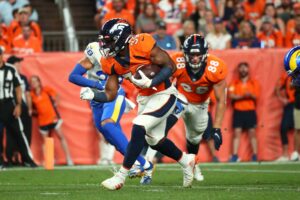 The Broncos later waived Crockett and added him back to their practice squad once again.

Crockett is yet to appear in an NFL game so far in his career.