Ian Rapoport confirms LB Josey Jewell suffered a torn pectoral and will miss the rest of the season.

According to Ian Rapoport, the Broncos fear LB Josey Jewell has a potentially significant pectoral injury. 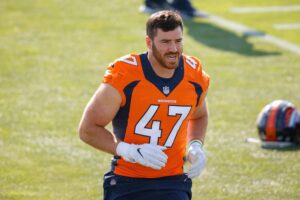 Jewell is having an MRI to determine the extent of the injury. If it’s completely torn, it would be season-ending for Jewell and the Broncos would be down a starter at inside linebacker.

He will be an unrestricted free agent in 2022.

In 2021, Jewell has appeared in two games for the Broncos and recorded eight total tackles, two tackles for loss, one forced fumble and one pass defense.