Mike Klis of 9 News reports that the expectation is Broncos QB Teddy Bridgewater will be cleared by independent docs Friday morning and fully practice today. 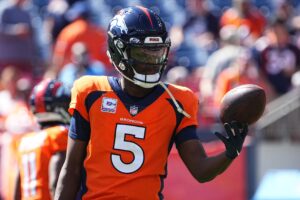 According to Klis, Bridgewater will meet with the Broncos’ medical staff after practice, but barring a setback, the expectation is he’ll be fully cleared for Sunday’s game.

Bridgewater signed a one-year, $6 million contract with the Jets that included just $500,000 guaranteed. However, the Jets later traded him to the Saints during the preseason and he returned to New Orleans in 2019 on another one-year contract.

The Panthers signed Bridgewater to a three-year, $63 million contract in 2020. However, Carolina traded him to the Broncos this past offseason.

In 2021, Teddy Bridgewater has appeared in four games for the Broncos and completed 72.1 percent of his passes for 892 yards, five touchdowns and no interceptions. He has also rushed for 46 yards.