Tom Pelissero of NFL Media reports that the Broncos have requested permission to interview Lions DC Aaron Glenn for their head coaching job. 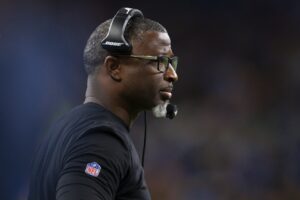 Here’s the updated list of head coach candidates for Denver:

Glenn, 49, is a former first-round pick of the Jets back in 1994. He played 15 seasons for the Jets, Texans, Cowboys, Jaguars and Saints.