Mike Klis of 9 News reports that Broncos rookie TE Albert Okwuegbunam is out for the season after suffering a torn ACL on Sunday. 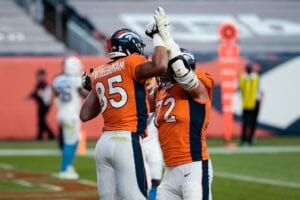 You can expect the Broncos to place him on injured reserve in the coming days and add someone to their roster.

Okwuegbunam, 22, was a three-year starter at Missouri and earned second-team All-SEC honors in 2017. The Broncos selected him with the No. 118 pick in this year’s draft.

In 2020, Okwuegbunam appeared in four games for the Broncos and caught 11 passes for 121 yards receiving and one touchdown.