According to Aaron Wilson, the Broncos are bringing in RB JaQuan Hardy for a workout on Tuesday. 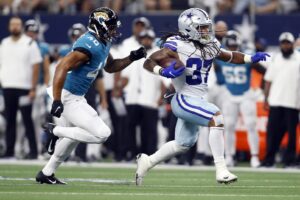 Hardy was ultimately released before the start of the season and ended up spending time on and off the Cowboys’ practice squad and active roster throughout the year before signing a future’s contract with the team back in January. Dallas ended up releasing Hardy a few weeks ago.