Buccaneers HC Todd Bowles said they still don’t have a date for when QB Tom Brady will return to the team. 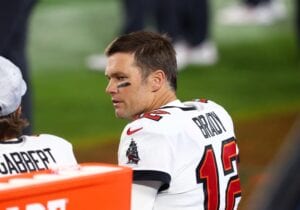 “We’ll see. We’ll talk about it next week. I’m not concerned about it right now,” he said via Greg Auman. “We’re trying to practice against Tennessee and play a game. I said sometime after Tennessee. There’s no definitive date for me. We’ll keep in touch and find out.”

Brady was excused from the team about a week ago and was expected to miss their first two preseason games. At the time, Bowles said it was a pre-planned absence from before training camp and they weren’t worried about it.

Bowles added he has a “pretty high level” of confidence that Brady will play in Week 1, though notably not guaranteeing it.

Ian Rapoport mentioned on the Pat McAfee Show that Brady’s absence is not health or family related, but is an attempt to find a good “work/life balance”: “To my knowledge Tom Brady & his family are fine & it’s not a medical emergency.. the best description I got was it’s important to find a work/life balance.”

Brady retired briefly earlier this offseason but came back after just 40 days.

Brady, 45, is a former sixth-round pick of the Patriots back in 2000. He was in the final year of his two-year, $41 million contract when he agreed to another two-year extension in 2017.

Brady has one more year on his current deal and would be an unrestricted free agent in 2023.

For his career, Brady has thrown for 84,250 yards, 624 touchdowns, 203 interceptions while completing 64.2 percent of his passes. He was a seven-time Super Bowl champion, a five-time Super Bowl MVP, a three-time MVP, 15-time Pro Bowler, and made six All-Pro teams in his career.

Brady is the all-time leader in touchdown passes and yards.

We’ll have more on Brady and the Bucs as the news is available.

Three Other Teams Were Interested In Signing WR Cole Beasley