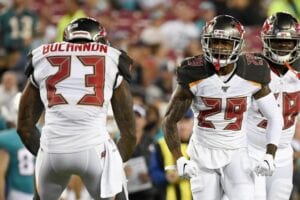 This opens a three-week window of time for the Bucs to activate Barner from injured reserve and add him to their 53-man roster.

Bucannon, 28, is a former first-round pick of the Cardinals back in 2014. He played out the final year of his four-year, $7,709,200 contract when the Cardinals picked up his fifth-year option.

Bucannon left Arizona as an unrestricted free agent last year and signed a one-year deal with the Buccaneers. He was released last season and later signed by the Giants to finish out the season.

The Falcons signed him to a contrachttps://twitter.com/BuccaneersComms/status/1350548383686144004t back in May but cut him loose and added him to the practice squad last month but was cut after a few weeks. He caught on with the Buccaneers’ practice squad earlier this month and was promoted before returning to the taxi squad.

In 2019, Bucannon appeared in 14 games for the Buccaneers and Giants, totaling 26 tackles and no interceptions.