Jenna Laine of ESPN reports that the Buccaneers brought in six free agents for workouts on Tuesday, including C Anthony Fabiano.

Greg Auman reports that the Buccaneers signing Ware to their practice squad.

Fabiano, 26, wound up signing a three-year, $1.62 million contract with the Ravens as an undrafted free agent out of Harvard back in 2016. He was, unfortunately, cut loose during the final week of the preseason and later signed on to the Browns’ practice squad.

From there, Fabiano has played for a number of teams including the Browns, Redskins, Patriots and Colts before signing on with the Eagles last year. Philadelphia re-signed him to a futures contract back in January but elected to waive him during final roster cuts.

Since becoming a free agent, Fabiano worked out for the Bears but he left Chicago without a contract.

In 2017, Fabiano was active in five games and started one for the Colts. 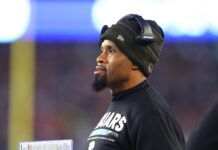