The Arizona Cardinals announced that they are placing WR DeAndre Hopkins and CB Robert Alford on injured reserve while activating RB Chase Edmonds from the list. 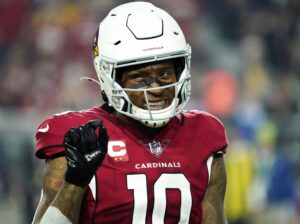 The team is also activating S Charles Washington from injured reserve and elevating CB Kevin Peterson to their active roster for game day.

Hopkins is looking at about a six-week recovery timeline, which means he has a chance to play in the playoffs but probably not until the conference championship game or later.

Hopkins, 29, is a former first-round pick of the Texans back in 2013. Houston later traded Hopkins to the Cardinals in return for David Johnson and draft picks.

In 2021, Hopkins has appeared in 10 games for the Cardinals and caught 42 of 63 targets for 572 yards receiving and eight touchdowns.

We will have more news on Hopkins as it becomes available.