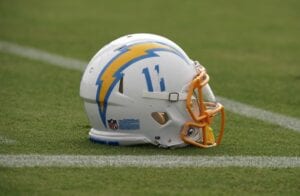 Hall, 25, signed with the Cowboys as an undrafted free agent out of Northwestern following the 2019 NFL Draft. He was waived by Dallas coming out of the preseason and signed to the Bills practice squad.

Hall bounced on and off Buffalo’s practice squad until signing with the Texans’ practice squad in December. He was among Houston’s final roster cuts coming out of training camp and re-signed to the taxi squad shortly after.

The Texans waived in August and he was claimed by the Panthers. However, he was released with an injury settlement after a few weeks and just recently signed on with the Chargers.

In 2020, Hall appeared in 10 games for the Texans and recorded seven total tackles, two sacks and one forced fumble.