The Los Angeles Chargers officially designated TE Donald Parham for return from injured reserve on Wednesday, according to Aaron Wilson. 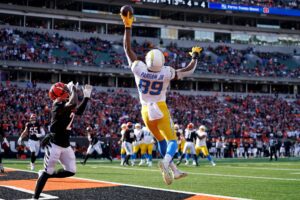 This officially opens a three-week window of time for the Chargers to activate him or he would miss the remainder of the season.

Parham, 25, originally signed on with the Lions as an undrafted free agent out of Stetson but was waived after a couple of days and signed by the Commanders.

Unfortunately, Washington waived Parham coming out of the preseason and he had a brief stint on their practice squad. From there, he signed with the XFL’s Dallas Renegades before signing with the Chargers in April of 2020.

He returned to Los Angeles on a one-year deal and then re-signed with them once more as an exclusive rights free agent.

In 2022, Parham has appeared in two games for the Chargers and caught three passes for 53 yards.