Update: According to Adam Schefter, Chargers QB Tyrod Taylor is considered week-to-week with the chest injury that caused him to miss Sunday’s start and be hospitalized.

Taylor is still considered Los Angeles’ starting quarterback when healthy but it’s unclear when that will be. First-round QB Justin Herbert will start in Taylor’s place in the meantime.

In Sunday’s 23-20 overtime loss to the Chiefs, Herbert completed 22-33 passes for 311 yards, one touchdown and one interception while also rushing four times for 18 yards and a touchdown.

The Los Angeles Chargers issued the following statement regarding QB Tyrod Taylor, who has been discharged from the hospital after experiencing chest pains before Sunday’s game. 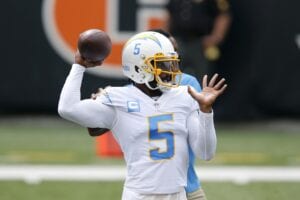 “Prior to kick off, Tyrod Taylor experienced difficulty breathing & was taken to the locker room for evaluation. He was transported to the hospital shortly thereafter to undergo further evaluation.

“Taylor (chest) has since been discharged from the hospital. His status for next Sunday’s game will be determined later in the week.”