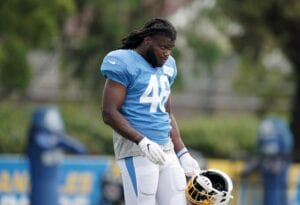 The Bengals waived Jefferson last year and he was later claimed by the Browns. He had a brief stint with the Chargers before catching on with the Titans.

From there, Jefferson returned to the Chargers a few weeks into the regular season last year and was eventually promoted to the active roster.

In 2020, Jefferson appeared in 13 games for the Chargers and recorded three tackles.