According to Jeremy Fowler, the Los Angeles Chargers are releasing OLB Jessie Lemonier. 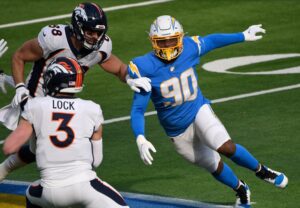 He was the first of Los Angeles’ cuts in the process of trimming the roster to 53 players.

Lemonier, 24, signed with the Chargers as an undrafted free agent in 2020. After getting waived in September, Lemonier spent the season bouncing back and forth between the Chargers’ practice squad and active roster.