According to Tom Pelissero, Chargers WR Jalen Guyton has a torn ACL and will miss the remainder of the 2022 season. 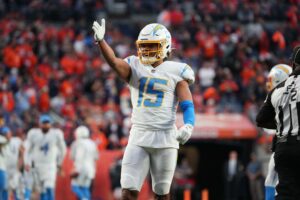 It’s another blow to Los Angeles, which has become snakebit with injuries through the first few weeks of the season. Guyton was probably their fastest receiver.

Expect him to be placed on injured reserve in the coming days.

Guyton, 25, wound up going undrafted out of North Texas back in 2019. He later signed on with the Cowboys, but lasted just a few months in Dallas before he was waived and signed to the Chargers practice squad.

In 2022, Guyton appeared in three games for the Chargers and caught two of four targets for 64 yards and no touchdowns.