According to Adam Schefter, Panthers RB Christian McCaffrey is expected to remain out with his shoulder injury this week against the Lions. 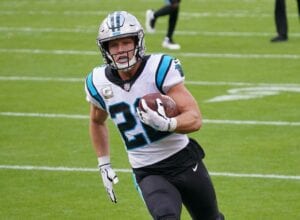 Schefter says the team is preparing for a multi-week absence for McCaffrey after he was injured last week against the Chiefs.

The star runner for the Panthers just returned from a month-long absence from a high ankle sprain before being injured again in his first game back. There was some optimism he’d be able to return, but the team is being careful with him.