The Indianapolis Colts announced Tuesday that they have activated S LaRon Landry from the exempt/commissioner permission list and OT Xavier Nixon from short-term injured reserve.

Landry was suspended four games for violating the NFL policy on performance enhancing substances back in September.

So far this season, Landry has recorded 23 tackles and a sack over the course of four games.

Nixon, 24, was placed on injured reserve with the designation to return just days before the start of the regular season due to a knee injury.

The Colts signed Nixon as an undrafted free agent out of Florida last year. He appeared in four games for them during his rookie season. 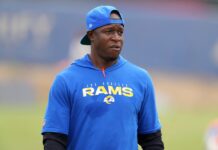