Colts HC Frank Reich told reporters today that G Quenton Nelson will return to practice and be designated to return from injured reserve, per Zak Keefer. 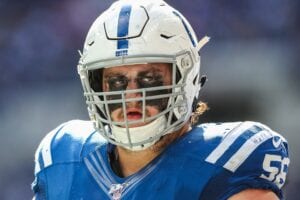 This opens up a 21-day window for Nelson to practice with the team before he has to be added back to the active roster.

He was dealing with a high-ankle sprain in addition to a foot injury from training camp.

In 2021, Nelson has appeared in and started three games for the Colts at left guard.