According to Aaron Wilson, the Colts brought in free agent CB Isaac Yiadom for a workout on Thursday. 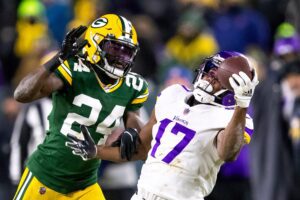 Yiadom was traded to the Giants at the start of the 2020 season for a 2021 seventh-round pick. He was then traded again to the Packers for CB Josh Jackson.

In 2021, Yiadom appeared in all 16 games for the Packers and recorded 10 tackles.