The Dallas Cowboys announced that QB Dak Prescott is being taken to the hospital after suffering a “serious right ankle injury.”

Cowboys QB Dak Prescott suffered what appears to be a serious ankle injury that required an air cast during the second half of Sunday’s game and he was later carted off of the field. 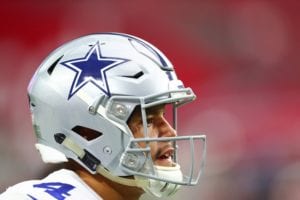 Prescott was in tears as he was taken to the locker room.

Andy Dalton has replaced Prescott as the Cowboys’ quarterback.

Prescott was attempting to scramble for a first down when his ankle folded underneath a defender. It’s clear that this is likely a season-ending issue for Prescott.

Prescott is playing out the 2020 season under the franchise tag and will $31.4 million fully guaranteed before being in position to test the open market next year.

Entering today’s game, Prescott had appeared in four games for the Cowboys and completed 68.2 percent of his passes for 1,690 yards, nine touchdowns and three interceptions. He also rushed for 86 yards and three touchdowns.