The Miami Dolphins announced Friday that they’ve placed defensive back Elijah Campbell on the active/non-football injury list and cornerback Byron Jones on the active/physically unable to perform list. 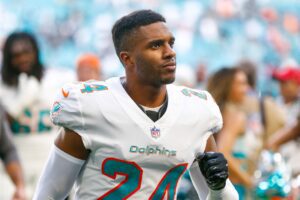 The Dolphins can activate them at any point between now and the start of the regular season.

Jones, 29, is a former first-round pick out of Connecticut by the Cowboys in the 2015 NFL Draft. He played out the final year of his four-year, $8.601 million rookie contract, but the Cowboys elected to pick up his fifth-year option in 2019 which cost them $6,266,000, and entered free agency the following offseason.

In 2021, Jones appeared in 16 games and recorded 59 total tackles, no tackles for loss, no interceptions, one forced fumble, and 10 pass defenses.