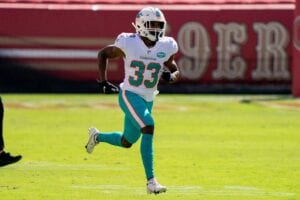 Munson, 26, originally signed on with the Giants as an undrafted free agent out of San Diego State back in 2017. He managed to make the Giants’ 53-man roster but was waived coming out of the preseason a year later.

From there, the Giants signed Munson to their practice squad soon after and he had a brief stint with the Patriots before joining the Dolphins in 2019.

In 2020, Munson appeared in all 16 games for the Dolphins and recorded eight tackles and no sacks.

Perry, 26, wound up going undrafted out of Iowa State back in 2017. He later signed on with the Eagles, but last just a few months in Philadelphia.

From there, Perry was on and off of the Patriots’ practice squad before signing on with the Dolphins in 2019.

In 2020, Perry appeared in 13 games for the Dolphins and recorded 26 tackles and a pass defense.