According to Justin Jouvenal of the Washington Post, a judge has dismissed the remaining misdemeanor domestic violence charges against Derrius Guice. 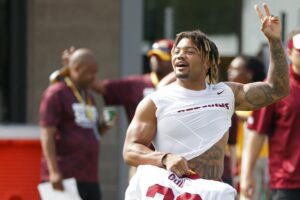 The former Washington running back reached a settlement with the woman involved. He had previously been charged with felony strangulation but that was dropped earlier this year.

Guice will not have a criminal record after the court dropped all charges, satisfied with the settlement between the two sides as a resolution to the case that had been scheduled to go to trial later this month.

The two sides released a joint statement afterward but otherwise did not comment to the press.

“They have both worked hard toward a resolution of their relationship and appreciate the input and consideration of the Commonwealth,” the statement read.

Guice was arrested last August on the charges and subsequently released by Washington. His lawyers gave no indication about whether he would look to resume his football career.

In 2019, Guice appeared in five games for Washington and rushed for 245 yards on 42 carries (5.8 YPC) to go along with seven receptions for 79 yards receiving and three total touchdowns before being placed on injured reserve in December.