Field Yates of ESPN reported that the Eagles are bringing in free agent RB Jordan Howard for a visit.

According to Ian Rapoport, the Eagles are expected to sign Howard to their practice squad after he clears the COVID-19 protocols. 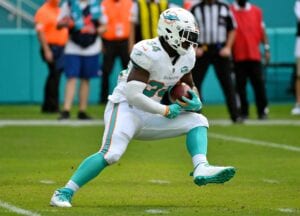 Howard played well for the Eagles last year and would give Philadelphia some additional depth at running back.

It’s worth mentioning that the Eagles placed RB Corey Clement on the COVID-19 list Thursday and he was a close contact to WR J.J. Arecega-Whiteside, who tested positive.

Howard played out his rookie deal with the Eagles and signed a two-year, $10 million deal with the Dolphins in free agency. Miami waived him on Monday.

In 2020, Howard appeared in five games for the Dolphins and rushed for 33 yards on 28 carries (1.2 YPC) and four touchdowns.