According to McManus, there are no immediate plans to interview anyone other than Groh or Staley for the offensive coordinator job.

Last weekend, Pederson mentioned during an appearance on “Basketball and Beyond with Coach K” with Duke basketball coach Mike Krzyzewski that he hasn’t ruled out handling the offensive coordinator duties next year.

“I’m thinking through a lot of things and processing a lot of things right now, a lot of names,” Pederson said, via Pro Football Talk. “I haven’t ruled out not having an offensive coordinator. But you know, as a head coach and some of the responsibilities that I have to do during the week and some of the other obligations, I’ve got to look at that too. Because that’s where your offensive coordinator can really step in so, like I said, I’m processing a bunch of things. I’m not going to rush into it, I’m going to make sure it’s the right person, the right fit for what we’re doing. I think that’s important too, that that person fits the culture and his way of thinking has to coincide with the way we’re thinking and … calling the plays and go from there.”

We’ll have more regarding the Eagles’ offensive coordinator job as the news is available. 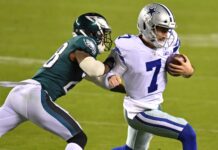 187,479FansLike
7,623FollowersFollow
275,570FollowersFollow
© NFLTradeRumors.co is an independent news source and has no affiliation with the National Football League (NFL), NFL.com, or any team(s).