Field Yates reports that the Eagles have restructured the contract of CB Darius Slay, converting $14.88 million of his salary into a signing bonus in order to create $11.904 million in cap space. 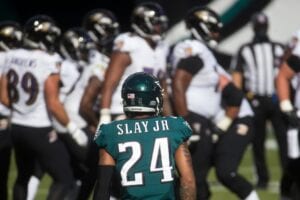 Last March, the Eagles did the exact same thing with Slay’s contract in order to free up $9.14 million in cap space.

Slay, 31, is a former second-round pick of the Lions back in 2013. He played out his rookie contract before agreeing to a four-year, $50.2 million extension that included $23 million fully guaranteed.

Slay was traded to the Eagles in 2019 and he quickly agreed to a three-year, $50 million extension that included $30 million guaranteed with Philadelphia.

In 2021, Slay appeared in 16 games for the Eagles and recorded 52 tackles, three interceptions, and one touchdown.