Tom Pelissero of NFL Media reports that the Eagles are signing former QB Tyree Jackson to a futures contract for the 2021 season as a tight end. 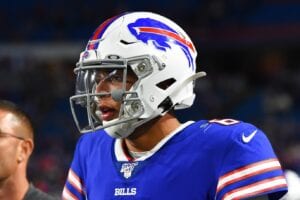 Here’s the updated list of futures signings for the Eagles:

Jackson, 23, wound up going undrafted out of Buffalo back in 2019. He lasted just a few months in Buffalo before he was waived at the start of the regular season.

At Buffalo, Jackson threw for 6,999 yards while completing 55.8 percent of his passes to go along with 49 touchdowns and 24 interceptions over the course of 32 games.